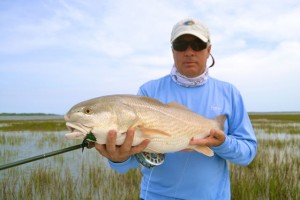 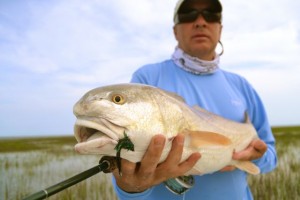 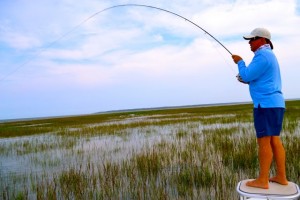 This spring has to go down as one of the best for chasing tail in the grass.  Between the big northeast winds pushing water on the coast causing big tides or just our normal spring tides we have had more time than I can remember in the grass.  We have another big tide tonight, and as bad as I want to go other priorities call, no fear though Thur. night I’ll be back watching and hopefully catching some reds as the make their way through the marsh.  Bob Vought and I took a stroll down almost the entire coast checking and looking for new places to fish and boy we found some nice schools of fish.  As we made our run down the coast you have to stop and say wow !  Having so much unspoiled coast is not something you get to see very often.  The fish above had some nose issues,  I have caught another red with the same nose some years back. I wonder if there is a mature bull red out there spawning off some of these funky nose fish. I had a Newbie out last night and we found some nice fish working a old school spot that has seen a new group of fish move in.  We hooked a nice red that allowed us numerous cast before eating the fly.  We also had another fish we chased all over coastal Georgia before he ate the fly.  Both fish didn’t make to the boat for the pic. Whatcha gonna do?  This is not just a fly fishing scene in the marsh,  fish are taken on spinning equipment as well.  Small jerk baits on a off set hook works great.  I wonder why more spin casting folks have not gotten into the tailing gig in the area ?