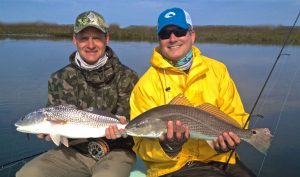 Ya gotta love the first catch of the day is a double !  It was too cold to start the morning off and the fish were doing a bit of hiding, but as soon as the sun broke from a light cloud cover, there they were and all to happy to eat a fly.  I had the chance to fish a Chitim Skiff this week for two days, and what a boat !  Warren had just purchased one with a 12 degree dead rise, and what a difference having a bit of V at the end of the day makes.  We had some good chop to go thru on the way back to the ramp and that boat ate it up.  Also this skiff is so light, with a 70 hp yamaha, half a second at half throttle, and on plane.  With the standard transom, turning this skiff was a dream as well.  Talking about spinning a boat on a dime, and it tracked like a laser while poling.  Incredible boat !