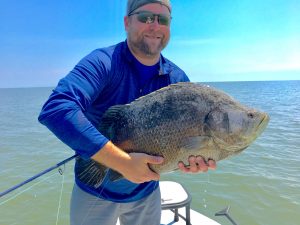 This Is Jeff Hope, who has a cool girlfriend !! (Emily) h  She had booked a trip with me while they visited Savannah for his Birthday.  This was a total surprise to Jeff, who didn’t know until they were in town.  Jeff was bummed a bit at first,  because he hadn’t had time to practice his cast.  Jeff had never been salt water fly fishing, but it didn’t take long before he had a redfish or two. After we had our fill of reds we decided to go run out in the ocean and look for some albies.  Along the way we came across this monster girl floating along.  Jeff made one cast I think that fell short, but on his next cast this girl see’s the fly prior to hitting the water.  Slam !  She eats just as the fly hits the surface, and realized she had made a big mistake.  Oh Shit ! She says and skips across  the surface for 40 yards.  She looked like a giant rock getting skipped across the ocean.  When I first saw this gal floating I said to myself, that’s a world record.  I wasn’t about to tell Jeff and Emily a thing before getting her in.  The fly record is 16 lbs   This gal went 20lbs and some change.  After landing her, I tell Jeff you have a world record,  Jeff asked what do we have to do to register this fish.  I told Jeff we would have to kill it.  He and Emily said they didn’t want to kill her,  I almost did a backflip.  I couldn’t stand to have killed this girl for an ego boost.  3 people know we broke that record easily. a few pics and off she went to hopefully produce many more her size.  As long as she can stay away from corkers. Did I mention Jeff had never salt water fly fished and did this on a 8wt with 16lbs tapered leader.Congrats Jeff, and Thank you for not. wanting to kill such a beautiful fish.