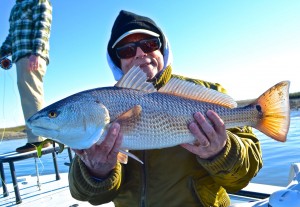 My neighbor John got a fly rod and was ready to put it to good use on some reds.  John had never done salt water fly fishing, but had been practicing on the bass ponds around his office.  A little practice had paid off.  After a couple of eats that he missed John put the stick to a nice red. I’m always stressed when some one wants to get their first red on fly.  John got it done and his dad ended up hooking into a good’n later in the day.  Getting the first one is always the toughest.  Nothing can ruin a mans cast faster than a school of 25-50 reds coming at him !