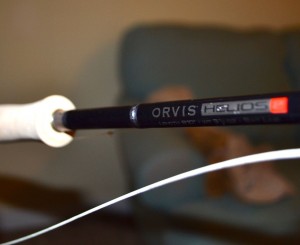 Wow doesn’t even begin to describe this rod.  I have casted a number of Orvis rods in the past with somewhat mixed emotions.  The Helios 1 was a great feeling rod but suffered somewhat into the wind with longer cast, but the short cast felt good.  Now they have come out with the Helios 2 and Dang that rod can cast long and short.  The first thing I noticed when I casted with the Helios 2 was it’s ability to cast such a tight loop with no effort in trying to do so.  This tight loop is not just for looks, a type loop is what drives a cast into the wind, and let me tell ya the Helios 2 does this effortlessly !!  I set a couple of pine cones in the front yard, wanting to hit them or lay in between both.  This rod was putting it on the spot.  Hitting the pine cones and laying the fly between them was easy.  Accuracy also comes with a tight loop.  As I said before the Helios 2  cast a tight loop with  no effort at all.  Orvis has hit this one out of the park !! I thought I would never cast a rod I like better than my Hardy’s, Guess I was wrong. Way wrong.  Anyone looking for a new rod this is a must see and cast.  Anyone interested in casting this beauty should stop by Rivers and Glenn fly shop in Savannah.