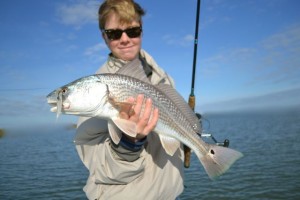 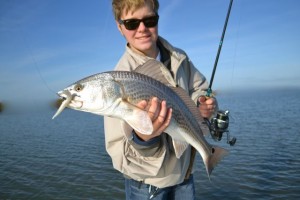 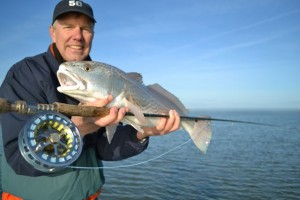 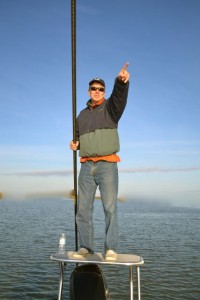 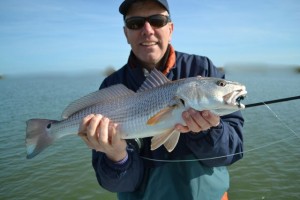 It’s that time of the year when numbers are good for sight casting nice schools of fish.   John Kennedy and his son John headed out with me and what a good time on the water we had.   As we began our day we poled all over the flat not finding a single fish.  The longer this went on the more I began to stress.  Due to this flats remote location I had no fall back in case I couldn’t find them.  Well after an hour of looking we hit major pay dirt.  John’s son had never caught a red before and, he managed to nail four on the spinning rod and larger size John nailed four on the Buggy Whip.  Then We put large size John on the pole and I had the chance to catch a couple of reds.10 fish sight casted to, not a bad day.  We have had some neat fishing at low water lately,  I have seen some nice fish belly crawling,With their backs out!  Not often do I see the pattern in  Dec. Jan.  and some nice tailing action on the low water as well.  I guess with the moderate temps the bait is shallow hence the pattern. The evening turned out to be awesome and we had a beautiful run back to Savannah with a incredible sunset to cap off the day.  The trout bite continues to be strong with non stop action going on.  If at first you don’t find them bounce around a bit.  If you don’t get bites soon, move. Trout will smack something if they are there.