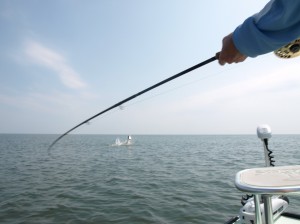 Terry Gibson all hooked up

Sight Casting Tarpon on the Georgia coast is in full swing!!  Terry Gibson and myself show up in a n area that has had a good number of fish busting baits and rolling.Guess what happen ? No bait and we were not seeing any signs of tarpon.   I tell Terry we should hang and wait, since there has been plenty fish in the area the past few days and they may show.   An hour later we see the first fish roll, then another just floating 30′ away with his tail out!! We make a cast a the tailing tarpon,  the fish swings on the fly and misses.  Dag nabbit!  But wait,  he pops back up and is tailing again.  About that time here come 2 more fish cruising cutting huge wakes.  I tell Terry 2 wakes at 12 o’clock.  Terry places the fly in the perfect spot, as soon as the fly hits the water one of th fish eats. Terry comes tight and all hell breaks loose. Terry’s fish is about 80-100lbs and going nuts!!  45 minutes later we leader the fish and in doing so break his 12 wt.  Terry and myself have also had some epic red fishing on top water.  Using poppers yesterday we caught 7 or 8 reds, and had a blast watching them blast the top.